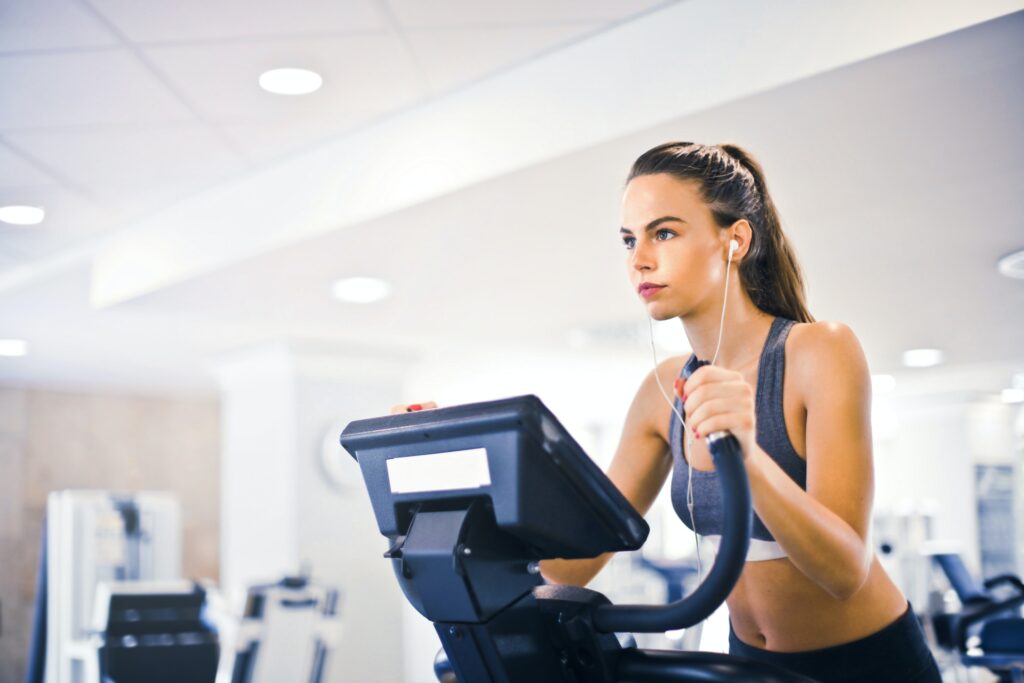 True play is open-ended. There may be a goal, but it is not uppermost. Rather, the joy is in the doing, no matter the outcome.

As a society, we have forgotten how to play. What we call play is often just another form of work because it is so goal-driven. We even go to the gym to “work out”; we rarely “play” at the gym. The determined look on the face of the young woman working out in the image above is quite common. How many joyous faces do you see at the gym or playing games or even walking? Are walkers merely putting in the requisite number of steps or are they experiencing themselves and their environment?

And to the extent that we are obsessed with winning at video games, even they become “work.” Achieving the goal is the be-all and end-all of the game. Attention to what is happening to the player while playing is lost in the obsession with the goal.

F. M. Alexander noted this in the latter part of the 19th century. He called it “endgaining,” and marked it as the root of all of society’s ills, including the misuse of the Self. After reading the first few pages of Meditations on the Tarot, it occurred to me how beautifully Alexander’s work leads us into the desired state of “action (or concentration) without effort.”

Let me be clear: this does not mean one wanders aimlessly through life with no purpose, no goal. Certainly not! Instead, it means that we bow to the realization that we don’t really know how to achieve our goal until we consciously or unconsciously link up with the Invisible Realm, the spiritual dimension of the Self. As the I Ching says, “Genius is the ability to receive from the cosmos.”

Because the Alexander Technique requires you to think differently, it (momentarily at first) stops the stream of monkey-mind chatter that usually occupies our thoughts. As this work is practiced, we can enter into what I call “Alexander mode,” where many such moments occur, and even, with more practice, a whole stream of moments occurs when we are fully aware of ourselves and our surroundings in a calm and alert way.

Many “magical” things can happen then! I have heard musicians play or sing with such beauty that tears spring to my eyes. I have seen athletes recover the joy in movement that called them to the athletic world in the first place: running with ease and buoyancy down the field where once they pounded heavily and ponderously. Along with lightness came greater speed and agility, not because of greater effort, but because of “effortless effort.”

What seems to me to single out the Alexander Technique is that it is done while in activity. That is, there is no particular form associated with it. It is a thinking process that takes you into awareness of your Self in all its dimensions as well as the world around you, no matter what you are doing.

How useful is that??? And while I dare say few, if any, ever achieve a constant state of that “Alexander mode,” the more it is practiced, the longer the intervals of ease and freedom within the Self. This, in turn, communicates to others so that we become “pools of calm” amid the whirlpools around us. Gradually we notice that others calm down, too. What a gift to the world!