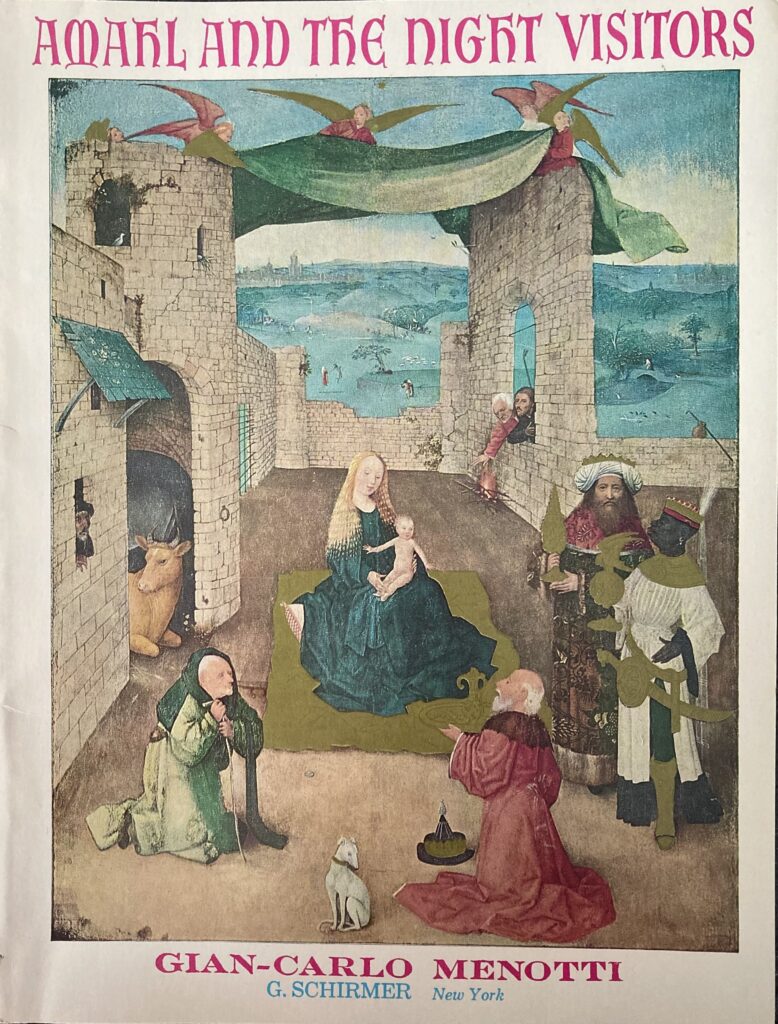 Today is the Feast of the Epiphany, when tradition celebrates the arrival of the Magi (Wise Men) from the East, offering gifts of gold, frankincense, and myrrh to honor the birth of Jesus. Their astrological and astronomical studies had predicted that the advent of an unusually bright star would herald the coming of the King of the Jews. What prompted them to travel such a long way to honor this particular birth is not clear. Surely there must have been other omens of other births?

Nevertheless, they probably traveled all the way from the land between the Tigris and Euphrates rivers, a place of ancient civilization and learning, to Judea, the homeland of the Jews.

Since we know so little about them, there have been several notable attempts to fill in the gaps. “The Fourth Wise Man,” a story by Henry van Dyke (and one of my favorites), imagines their origin in Persia, and a fourth man who didn’t make it to the birth. It is a beautiful story about love and sacrifice.

“Amahl and the Night Visitors” is another imagined story. It is a short opera in English by the Italian-American composer, Gian Carlo Menotti (1911–2007).

Menotti was born in Italy where instead of Santa Claus bringing gifts, the Three Kings brought them. Tradition has it that their names were Kaspar (who was the oldest), Melchior, and Balthazar (who was black). These are the three depicted in the painting on the cover of the piano-vocal score and the CD of the cast recording. Scripture doesn’t name them or even say how many there were. We have assumed three because of the three gifts mentioned. Menotti uses this tradition and builds his own story upon it.

As he tells the background to his story, he and his brothers would each pray to one of the kings to ask for certain gifts. Menotti was certain his king (Kaspar) was deaf because he never got what he wanted. So in his opera, Kaspar is a little deaf, which makes for much gentle comedy.

The plot hinges around a crippled shepherd boy, Amahl, who lives with his widowed mother in poverty. The sheep he tended have all been sold to provide food and warmth and a roof over their heads. Being crippled, Amahl spends a lot of time alone, and being a young boy of much imagination, he often dresses up the truth a bit. His mother is trying to break him of this habit, so when there is a knock on their door one evening, she asks him to go answer it and to tell the truth about who it is and what they want.
Now, wouldn’t you know that what he sees when he opens the door is a king with a crown?? He knows his mother won’t believe him, and she doesn’t. Another knock. This time two kings. At the third knock, there are three kings, and one of them is black!

Much byplay between mother and son provide the gentle humor of this scene. The kings enter with their page to sprightly and joyous music.

Having no wood for the fire, the mother goes out to gather some. While she is gone, Amahl questions the kings about their regal blood and the parrot and the mysterious box.They answer with patience, humoring his lively curiosity.

The mother returns with a few sticks for the fire and sends Amahl to their neighbors to bring food for their regal visitors. While he is gone, she sees the treasures, especially the gold, and asks who it is for.

The kings and the mother sing an aria of great beauty and longing. They are describing the child they seek, and she is thinking of her own child:

Melchior: Have you seen a Child the color of wheat, the color of dawn?
His eyes are mild, His hands are those of a King, as King He was born.
Incense, myrrh, and gold we bring to His side, and the Eastern Star is our guide.

Mother: Yes, I know a child the color of wheat, the color of dawn.
His eyes are mild, his hands are those of a King, as King he was born.
But no one will bring him incense or gold,
though sick and poor and hungry and cold.
He’s my child, my son, my darling, my own.

The aria continues as the kings describe the child Jesus, and the mother hears in their description her own son Amahl. At the end, the shepherds arrive and there is dancing.

As the shepherds leave to go home, Amahl timidly asks the deaf king, Kaspar, if among his magic stones there is one to cure a crippled boy, but Kaspar doesn’t hear him.

The kings go to sleep for the short time left in the night. The mother, however, is drawn by need and love to the gold sitting in the floor of her hut and meant for a king she will never know while her own son starves. They have so much and she so little, surely they would not miss a small amount? Slowly she creeps toward the gold.

The moment she touches the gold, the page is aroused. He shouts, “Thief!” and wakes the others. When Amahl awakes, he sees his mother being held captive by the page and hurls himself at the page to free his mother.

After some moments, his frantic and futile attempt to free her is stilled by the calm voice of Melchior, who gives, in this beautiful aria, as deep a christological statement as any learned scholar:

Melchior: Oh, woman, you may keep the gold.
The child we seek doesn’t need our gold.
On love, on love alone He will build His Kingdom.
His piercèd hand will hold no scepter.
His haloed head will wear no crown.
His might will not be built on your toil.
Swifter than lightning He will soon walk among us.
He will bring us new life and receive our death,
and the keys to His city belong to the poor.

Ashamed, the mother wants to give a gift to this special Child, but she has nothing to give. Amahl offers to give Him his crutch, and then. . . a miracle!

I never listen to this opera without tears running down my face, as they are doing now. To be able to create such a beautiful and profound work of art, masquerading as an opera for children—what a gift!! I can only imagine that Menotti, without any academic religious training, could put so much faith and feeling in the words and music of this opera by the grace of God.

And I am blessed every time I hear it!