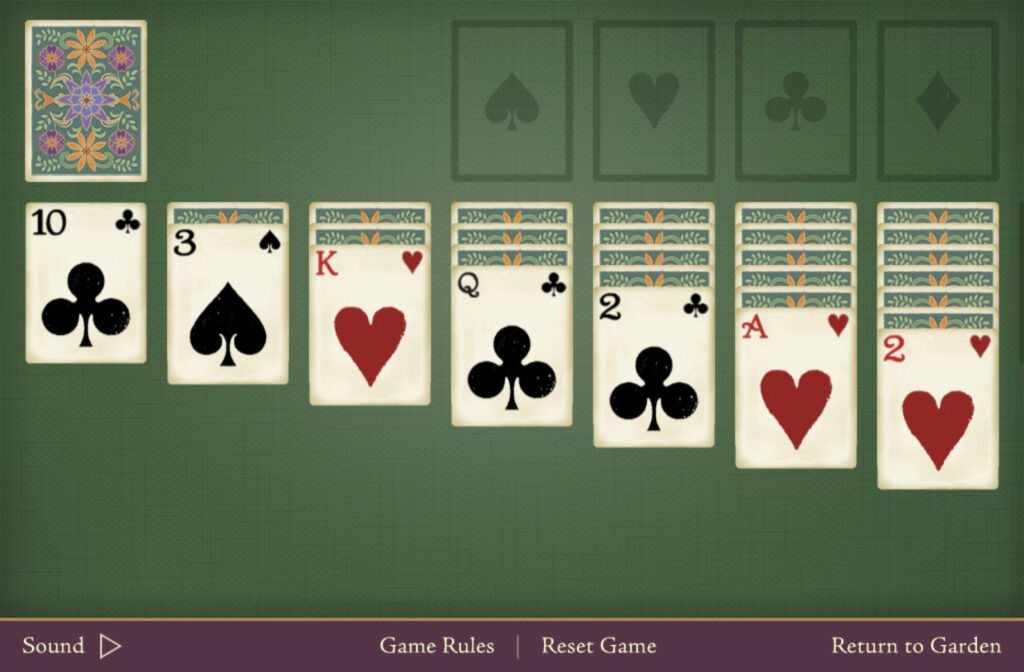 I wrote earlier about playing solitaire on Jacquie Lawson’s website. I was basically playing the easier of her two games, the one called “Spider.” Recently I have explored the more challenging game, “Klondike,” shown above.

According to her notes, the game is named for its popularity among miners in the Gold Rush days along the Klondike River in western Canada near the Alaskan border. Gold was discovered there in 1896, and about 100,000 prospectors from Seattle, San Francisco, and other places in the United States and Canada converged on the site to hopefully realize their dreams of becoming rich. While waiting for the strike—which for most of them never came—apparently they played this game of solitaire.

The rules are more complicated than for Spider. You begin with 7 piles of cards: the first pile has one card, which is face up. The remaining piles have 2, 3, 4, 5, 6, and 7 cards respectively, each with one card face up. There are also four areas blank, each with a suite. To win the game, each suite must be ordered from ace to king.

Yet another complication is that among the original cards in the 7 piles, the order must be the opposite to the four piles of suites: a red card must be followed by a black card or vice versa. Moreover, the cards must be in descending order, and only a king can begin a new ordering in this original 7 piles.

See? I told you it was more challenging than Spider!!

But aside from the rules, what I have learned from playing this game is to be “crafty” and not to give up too soon.

By crafty, I have discovered legal ways —because the computer program won’t let you cheat!— to shift cards. For example, if I have already put a card in the suite pile but I need its color and number in order to use one of the cards in face-down pile, I can return the already placed card back into play. Thus I can use one of the face-up cards that I couldn’t use before.

I have also learned that cards in the 7 piles have to be carefully observed or I will miss a chance to make a move that may be the very one that opens up several more cards for play.

One way I’ve answered this is to notice how I might let go of a project or challenge too soon, before I have made all the “crafty” moves possible. In other words, I have not explored all the ways I could think about this task before I say it isn’t possible, at least not for me.

Sometimes we must let go of a goal in order to complete it. By that I mean, we stop focusing on the goal and notice how we are trying to achieve it. This is the basic tenet of the Alexander Technique which I have taught for 20 years and which is still teaching me! This is where we discover alternate—“crafty”—ways of doing things.

An example of both of these is my relationship to re-learning to play the Mozart piano sonata in Bb major, K. 333.

My original goal was to learn the piece well enough to play for people some day when the pandemic lifts. Then it became to make a recording so those far away or those keeping safe might still hear it. But the moment I focussed on the goal, I began to make more and more errors, playing wrong notes where I didn’t even the first time I played it after a 50-year hiatus!

The Alexander Technique would help me to see that I was focusing on the goal and not the “how.” So I began to work away from he piano to “hear” the score in my head and work out fingerings. Then I would take it to the piano and try that section out. While there were adjustments here and there, I found this manner of practicing helpful—the “crafty” part.

Yet later on, I discovered that my goal might need to be revised. Unconsciously, I was setting my goal for there to be no wrong notes. An admirable goal, since wrong notes sound “bad.” But playing the right notes should only be a step toward making the music expressive; playing the right notes is not the ultimate goal. So I have had to let go of that goal if I am going to pursue my goal of recording a performance.

Still further on, it occurred to me that perhaps there was a deeper issue here: my relationship to the piano itself.

I began my musical training as a pianist, and kept at it for most of my musical life. Then in my adulthood, I switched performance modes to singing, and found that much more congenial to my personality, both musical and otherwise. I stopped thinking of myself as a pianist, and began to think of myself as a singer. In other words, I gave up working on solo piano music. I still kept up keyboard skills through accompanying others, but I gradually worked on simpler and simpler music—music that I could play well at sight and then could concentrate on the expression.

Now, this Mozart sonata presented itself to me. Solo piano music, for sure. And while not the most complicated in terms of thicker textures and more chromatics that can occur in piano music of a later period, it offers the challenge of a transparent texture that reveals every flaw in accuracy, phrasing, dynamics, and rhythm, not to mention tone color and shading to bring out the expression.

After getting more and more frustrated and less and less musical, I finally think I must give up the even more basic goal of thinking of myself as a “pianist.” Rather, I am a musician who sometimes plays the piano, but who also plays the harp (as a beginner), sings, composes music when the Muse strikes, and who even used to play the organ and conduct a choir! This puts my piano playing in perspective. After all, I spent most of my piano playing years as a “collaborative pianist”—what we might call an “accompanist,” although “collaborative pianist” is truer to the role and much more in vogue these days—not as a solo pianist.

So, I’m going to let go of my idea of myself as a “pianist” with its goal of a performance that is note-perfect so that I might enjoy playing the Mozart for myself, and if in the near future a recording happens, well, then, , , that would be nice but not required.

Ah! The freedom that brings!